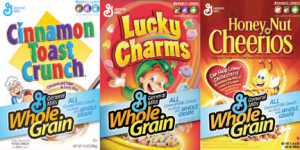 OK all of you that want to SERIOUSLY stock up on cereal…here’s a match up you’ve been dreaming about:

Right now the local Publix has General Mills cereal for $2.99 (Central Florida pricing) – this includes Lucky Charms, Honey Nut Cheerios, and Cinnamon Toast Crunch.
The yellow advantage flyer that just came out this weekend has a $2.00/2 coupon on those items…
That would be a great deal…but when you match that up with ANY manufacturer deal, and you’re getting cereal for less than a fifty cents a box!!!

UPDATE: There’s a $1/3 coupon available now that can be used 0n this deal – used it x2 last night to grab six cereals!!!

If they’re out of stock (as I’m reported they are at several locations) be sure to get a raincheck – they usually allow one for up to 10.

Permanent link to this article: https://www.thecouponhubby.com/2011/09/gm-cereal-0-49-each-a-publix-matchup/