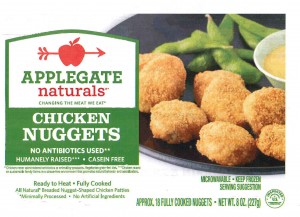 Purdue Foods is announcing the recall of more than 4,000 pounds of Applegate Naturals popular frozen Chicken Nuggets after extraneous plastic materials were found in some.

The recalled products include eight-ounce boxed packages of approximately 18 pieces of “Applegate Naturals Chicken Nuggets” that have a best-by date of Sept. 27, 2016. The boxes also contain an “establishment number” of P-2617 inside the USDA mark of inspection.

Though there have been no reports of adverse reactions by children who consumed the nuggets, Purdue announced the recall after receiving customer complaints of “small, solid, clear plastic” inside the actual nuggets.

Applegate Farms and Purdue are urging consumers who have the affected boxes to throw them out or return them to their place of purchase. Anyone with additional concerns should reach out to the company directly at [email protected]

The company says it has identified the source of the problem — “the final stages of mixing and producing the product” — and it “will take all the necessary corrective actions to eliminate the problem.”

Permanent link to this article: https://www.thecouponhubby.com/2016/03/recall-alert-applegate-naturals-chicken-nuggets/